IN HONOR OF VIGDIS FINNBOGADOTTIR, FORMER PRESIDENT OF ICELAND 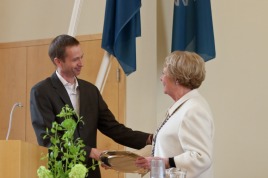 Vigdis's first career was that of a French teacher, and she has been a vigilant promoter of languages and culture throughout. Since 1998 she has held the title of Goodwill Ambassador of Languages at UNESCO. STIL used the opportunity offered by the birthday celebration to express its appreciation for Vigdís by making her an honorary member of the association. These pictures are taken at an honorary doctorate ceremony at the University of Iceland, as Eyjólfur Már Sigurðsson, secretary of STÍL, presents Vigdís with an engraved plaque as a token of her honorary membership in STÍL.

In the spring issue of our journal, Malfridur, there is an interview with Vigdís. Furthermore, Vigdis has expressed her appreciation of STIL by offering to be a protector of the NBR seminar "Sharing the Treasure Trove," hosted by STIL in Iceland this summer.

Click here to read the interview with Vigdis Finnbogadottir in English 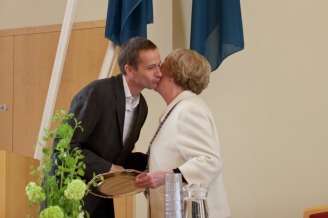